If you've arrived here in the off chance that you've stumbled upon the decayed remains of a solar balloon, let us know on the DofTNet Facebook Page

Yes, but not the sort that you'd find at a birthday party. DofT makes Solar Balloons - small hot air balloons that get their floatyness from the heat of the sunlight that shines on them. 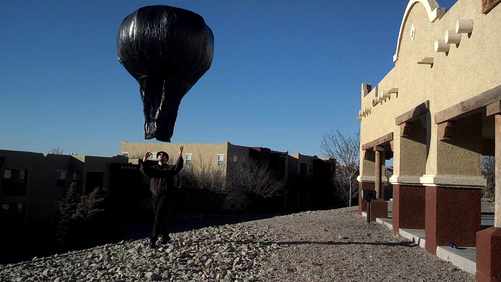 How did this become a thing?

DofT grew up in New Mexico in the 1980's and early 1990's and one of the many things New Mexico is known for is the annual Albuquerque International Balloon Fiesta. He went to the Balloon Fiesta several times while growing up over the years and it made an impression.

DofT is also a very curious sort and very much enjoyed his science classes, even if his grades didn't necessarily reflect it. In middle school, a class project was to build a tissue paper hot air balloon which the class launched from the parking lot after pre-heating them with a camp stove. They floated off for a while and once the air cooled down, they drifted back to the ground.

A couple years later, DofT sent $5 off to a mail-order science supply company (this was the mostly pre-internet days) in exchange for "UFO plans". Turns out, it was a few pages of photocopied text and drawings outlining a way of turning a trash bag into a hot air balloon of sorts, but using the heat from birthday candles to heat the air inside. Definitely not a fire-hazard.... So teenage DofT immediately built several and they worked quite nicely, flying for several minutes before finally flickering out and drifting back to the ground somewhere. The thought of people thinking these were UFOs ammused DofT but he doesn't recall hearing anything about it at the time.

As the weeks and months went on, He started making bigger balloons, first with bigger trash bags, then by cutting up several trash bags and taping them together to see if they would fly longer, or rise faster or... etc. for scientific curiosity. Eventually he made one that was large enough that the the candles couldn't heat the air inside enough to lift the balloon. He switched to heating the air inside it with a blowtorch. Yes. A teenager. Wtih a blowtorch. Fun times. Since he didn't want to lose the torch (and it was too heavy for the balloon to reasonably carry.. it was big but not that big) he would heat the air inside and not catch himself or the trash bags on fire, then let the balloon go. It would go up, then hover, then come back down. He did this several times on many evenings. and always recovered the balloon for another day.

Then summer rolled around. DofT spent much of the summer in a very sparsely populated area of the state with plenty of wide open spaces. One sunny morning, he got up and hauled his balloon outside and inflated it and started heating the air with his blowtorch before releasing it. It went up, then hovered as usual... then hovered a bit more... then started rising again! And then it started drifting away. The balloon was made out of thin black trash bags and it occured to him that he had never actually done this during the day. He watched it until it was gone, never to be sean again.

He immediately walked down to the local grocery store and got more trash bags and made another. This went on for the rest of the summer and continued as he had time, trying different designs and sizes, sometimes attaching boxes of rocks or notes. All this without having done any reseearch on if this sort of thing was actually legal, but as far DofT knows, nothing particulary bad has happened because of any of these activities.

All this ended up becoming DofT's final project for his associates degree wherin he and his team designed and mostly built a sensor and data package for a rather large balloon - one made of a total of 154 trash bags that was about 50 feet tall and 25 feet wide. DofT and his classmates ended up having to present before we had completely assembled the project, but got a good grade on the project anyway. DofT still has that balloon in a box somewhere.

Neat! Does DofT Still do this kind of thing?

Well.. Sure... Though not as often as he'd like, and he's a little more conscientious about FAA regulations and the like these days, and as far as he can understand, his balloons are mostly exempt... except §101.7 which essentially says "Don't do hazardous things".

Back at the end of 2012, he built and operated SolarBalloonTracking.com, a site which got lost along with everything else when the DofTNet server killed itself back in 2015. It was a site that allowed DofT to generate tracking labels for his balloons. Each tag had a QR code that he would scan when it was launched to record on the site the time and location where it was launched from, and if someone happened to find it, the could scan the code to record the time and location where it was found. Most of the balloons were never found, but after he set up the tracking site, eventually two of the balloons were found, both in Oklahoma.

Now back when DofT was making a sensor package for his giant balloon for his degree, microcontrollers were available but not particularly affordable or powerful. These days, we have things like Raspberry Pis and Arduinos and a whole bunch of other things available to tinker with, and DofT had started designing a shiny new, smaller sensor package for the balloons but, again with the server crashing... it was supposed to talk to the balloon tracking site to plot the balloon's full flight and not just it's start and end points.

After the servers crashed, DofT has attempted a few launches with notes asking to be contacted through the DofTNet Facebook site, but so far DofT hasn't heard anything.

Too bad about losing the site.. Will it be rebuilt?

Oh, probably, eventually... maybe? DofT is holding on to the domain names just in case. The old tracking addresses all redirect here in the meantime.

Can I do that? Photos! Plans! Instructions!!

Yeah, We'll add photos and instructions and all that as DofT finds the time.